Art by Ben and Raisa Gertsberg

Ben has recently completed his Sumo Wrestler In Blue painting, charcoal and acrylic on canvas, 30" x 30". This figurative minimalist abstract was inspired by the traditional Japanese martial art of Sumo wrestling and influenced by the Pablo Picasso's surrealistic and biomorphic exploration of the boundary between abstraction and figuration.

Ben was working on this painting, on and off, for half a year, changing it over and over again. He is currently working on another Sumo Wrestler painting that he had started even before the Sumo Wrestler in Blue, it is work in progress. Will post it soon, stay tuned.

The original painting is sold to an art collector in Yorba Linda, CA.

To learn more about this artwork and other original paintings by Ben Gertsberg, please visit: 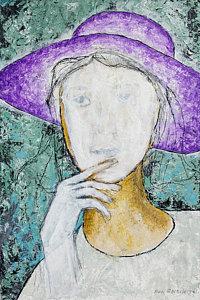 When Ben was working on this enigmatic female portrait, in expressionist style, deciding which color palette he was going to use, he had no idea that Violet, or, rather, Ultra Violet would later be announced as Pantone Color of the Year 2018. We both enjoy this color, so it was a nice surprise to learn that purple was now also "in fashion" and that Ben's lovely painting happened to feature it.

Based on our experience talking to people who purchased our artwork in the past, we know that color preferences vary wildly and different people enjoy different colors or prefer different shades of the same color. We have also seen many artists who like working with certain colors only, to the exclusion of other colors, and it's Ok.

However, if you happen to visit our website, you will see that our portfolio does not discriminate against any colors, and we are more than happy to give any color the royal treatment it deserves in a particular art piece, while using other colors as a "support team". And that is exactly what Ben has done in his new painting. The complimentary palette Ben has chosen includes teal green, turquoise blue, ochre yellow, shades of gray, and a touch of black prompted by charcoal use.

And, of course, it does not hurt that the color purple has been associated with real royalty - we have recently learned that, at some point in history, it was forbidden to anyone except close members of the royal family to wear purple. There was even an explanation given why, but it is an entirely different subject.

To see our portfolio, please visit: Artwork Into The Night II, by Ben and Raisa Gertsberg, has won first place in FAA contest 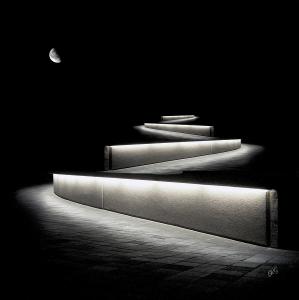 Happy to announce that on December 11th, 2016, our artwork Into The Night II won the first place in the FAA contest "ABC GROUP - Z IS FOR ZIG-ZAG", with 185 international artists participating. This piece of fine art photography is currently featured on the group's home page.

Into The Night II - from Black And White series, by award-winning artists Ben and Raisa Gertsberg, aka BRG, who collaborate under the name It's a Beautiful World!

Conceptual abstract art photography - minimalist cityscape in monochrome sepia, black and white tones, with geometric pattern created by urban street alley and wall brightly lit by half moon and zig-zaging into the mystery of night, toward the vanishing point.

Thank you to all artists and visitors who voted for our artwork!

Art by Ben and Raisa Gertsberg

As you know, Ben was working on another Sumo Wrestler painting which he has recently finished. He started it before his Sumo Wrestler In Blue piece and then he took some time to paint his new piece Sunset Surfer.


Charcoal outlines the surfer's figure figure and Ben used two colors, red and blue, to create this figurative minimalist abstraction. The piece is inspired by the beauty and elegancy of surfers soaring over waves and basking in the sunset and influenced by the Pablo Picasso's surrealistic and biomorphic exploration of the boundary between abstraction and figuration. The figure of girl surfer is balancing on the invisible surfboard, in perfect harmony with the wind and ocean waves.

Ben's Sumo Wrestler is also a figurative minimalist abstract art piece, in muted shades of olive green. It was inspired by the traditional Japanese martial art of Sumo wrestling and influenced by the Pablo Picasso's work.

Ben is happy with both pieces and he is currently working on another piece for this series.

To learn more about these artworks and other original paintings by Ben Gertsberg, please visit: In our Ancient City Architecture fine art photography series the Old City of Jerusalem and its architecture are the primary focus. This series includes three black and white pieces in monochrome sepia tones. We wanted to render the feel of the old historic town where shadows and light paly on the stone walls, cobblestone streets, curved arches, hidden stairs and intriguing pathways.This infinitely facinating place is important not only for the Middle East but for the rest of the world as well.

The images may first appear slightly abstracted but, when examined more closely, they look quite realistic, are richly textured and feature intricate geometric patterns. The series aims to create nostalgic mood reminding us of the times long past but not forgotten. Enjoy!